Jerry D Young has written well over 100 survival fiction stories and offers them on his site along with the stories from Tired Old Man (TOM) and from Fleataxi. Visit his page under Other Authors listed above to find out more.

Adrian’s Undead Diary, a diary based story and We’re Alive, a zombie podcast have both been added to the Other Stories menu.

We’re Alive, now in it’s fourth and final season is a fantastic audio drama based around a zombie uprising and a group of people trying to remain alive. The production quality is outstanding and if you like audio books you’ll probably enjoy it as much as I have.

Adrian’s Undead Diary started as a blog based posting of diary entries and has morphed into an epic tale with a large handful of other tales and side stories interwoven into the plot. The author has explored a lot more than just zombies. He delves into survial tactics and pitfalls along with the psycological impact of dealing with life and death situations on a daily basis. If you’ve got a Kindle he is releasing the story via a series of Kindle books over the next year or so with the first two already available.

Look for more info and links to both of these authors on the Other Stories menu.

Susan Gregersen and Thomas Sherry have just had the content of their author pages added. Susan has written a variety of survival and preppering stories and even a few how to books. Thomas has a trilogy set in the pacific northwest based around a natural disaster that triggers the collapse of America.

I’ve read all three of Thomas’ books and just about everything Susan has written and enjoyed them all.

For those who are homesteading or even just someone with a backyard garden, saving seeds can be an important part of prepping. It’s a way of insuring your ability to grow food in the future. After years of experimenting with my seed storage I’ve come to the conclusion that paper packets that allow the seeds to “breathe” seem to be the best option. Wanting something other than a generic envelope, I created a template which I fill in with the details and then print and cut out. A few dabs of glue and the packet is ready to be filled.

In the library menu look for the Seed Packet page or just click here. 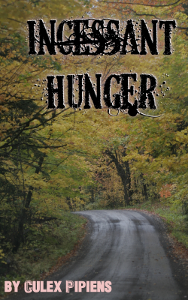 A new short story, Incessant Hunger, available as a free download has just been released. Find it under the Culex Stories menu along with all of the older ones too.

My stories are updated.

I’ve finished adding in all of my stories and have a teaser entry already added for the newest one, Incessant Hunger. Next up will be the addition of the stories written by other authors that I believe fans of my work would also enjoy.

It was time for a make over and a better structure to allow the Culex Pipiens web site to not only continue providing and promoting my stories, but to also feature some of the other survial and preparedness authors out there. There is also a vast amount of factual information, how to guides and other materials that were, at best, presented awkwardly in the old site.

Hopefully all of those goals will have been met with this new site and allow for some other ideas, under planning, to be included too. Feel free to comment good or bad on your thoughts of the new look and feel for CulexPipiens.com.