Susan Gregersen and her husband live in an off-grid, solar-powered cabin surrounded by forest and mountains in NW Montana. They produce nearly all of our food, through gardening, hunting, fishing, foraging, and the occasional domestic meat animals raised some years.

Her first book was “The Long Ride Home”, which was written on a cross-country bicycle trip in 2010. “It’s sort of a ‘what if’ about how I would have gotten home if the world had fallen apart while I was so far from home on a bicycle.”

Most of her books have started with real people in mind. There have only been a couple exceptions to that, where the characters and their situation at the beginning of the book came solely from her imagination. It makes her bristle when a reviewer says “Oh, there can’t be anyone like that”, because there really is! Everyone has different frames of reference to draw from but shouldn’t discount what other people know. After all, they say truth is stranger than fiction!

Pedaling her bicycle through the countryside, mile after mile, had been one of Sue’s favorite ways to travel. Despite the shaky conditions in the world, she and a friend embark on a cross-country bicycle trip.

She’s nearly two thousand miles from home when an EMP (Electro-magnetic pulse) over the eastern third of the nation takes out the power grid and cripples transportation. She must get home! Her husband, kids, and grandkids are back at their homestead in Montana!

Ride along with Sue on her harrowing and often dangerous journey from Mississippi to Montana across a country just realizing that the world as they knew it is gone. 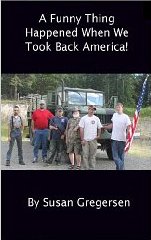 A Funny Thing Happened When We Took Back America!

This was one town that didn’t go quietly into the night when the UN troops arrived to begin the NWO takeover! The story follows a handful of people through the events, including two families from opposite sides of the social spectrum, and a team of army soldiers who are reluctantly carrying out orders — until enough is enough!

A growing number of soldiers have decided the army has gone AWOL on them. It’s no longer the army they signed up to serve. Working side by side, civilians and soldiers take back their town and send the foreign troops packing. 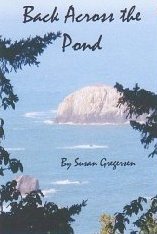 Back Across the Pond

“What would you do if you were overseas and the world collapsed? How would you get home?” my real-life friend asked me. She and her husband were about to leave for Germany to spend Christmas with his family.

Here is the story I wrote for them, of their journey home to the U.S. as the bottom fell out of the banking industry and nations went broke, rioting spread across Europe, and the world collapsed around them. By sea, air, and land they struggle to get home to their small ranch in Montana. 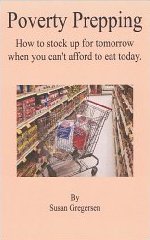 A lot of people think they don’t have enough money to store extra food for emergencies. It’s a struggle just to make ends meet and afford what they need right now. I think anyone can start to prepare for the future.

My husband and I have a 4-figure annual income that isn’t even close to hitting five figures. If we can do it, you can too. We’re not just telling you how to do it, we’re living it!

Don’t be put off by books, websites, and forums that lead you to think you have to buy expensive pre-packaged food storage, or foods that you’re not familiar with. Stocking up doesn’t have to be expensive or complicated. You can get started with just a few dollars a month.

This book is available exclusively on Amazon.
Click here to view the listing. 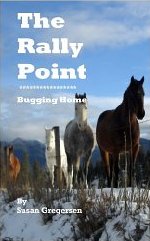 When an EMP over the eastern third of the US knocks out the power grid and disables cars near the detonation point, it takes a while for people to realize this is bigger than a normal power outage. But Sue and her family acted right away. Sue was 2,000 miles from their home in Montana. She was on a cross-country bicycle trip with a friend, and immediately headed for home. Her story is told in the book “The Long Ride Home”.

In this book, “The Rally Point: Bugging Home”, read about Sue’s husband, Walter, who readies things at home and prepares for the kids and grandkids to arrive, while worrying about Sue. The kids had humored their parents by making bug-out plans, and now they put them into action. They make their way to the rally point at the family homestead, arriving by car, truck, horse, motorcycle, bicycle, or on foot. When plans went askew, they relied on back-up plans or quick thinking to keep moving toward their goal: Home! 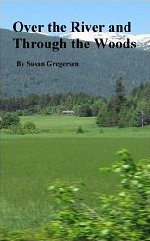 Over the River and Through the Woods

fiction short-story of economic survival and collapse, and one family’s efforts to survive. Lonnie and Pete are faced with hard decisions after they’re both laid off from their jobs. They have three children to feed, and then Lonnie’s Grandma moves in with them to save money. Despite their efforts, they lose their house.

Jeff’s parents are working overseas, but still own the family farm a couple states away from Pete and Lonnie. They pack up everything they can move in the two vehicles and move to the farm to start a new life.

The farm has sat empty for years, and only Grandma knows much about things like gardening… and Grandma fades in and out of reality. However, in their new life at the farm, Grandma perks up and takes matters in hand! The children love living in the country, and even Pete and Lonnie feel a new peacefulness that had eluded them in their materialistic city life.

A Tale of Two Preppers

Jeff and Jeannie live in a high-rise apartment building in the inner city. They’ve chased their careers and lived on take-out food, keeping almost no food in their apartment.

That is…until Jeannie reads a news article about storing food for emergencies. One thing leads to another and she starts learning how to cook, and her husband buys some precious metals, a campstove and fuel, and other supplies.

When Jeff and Jeannie discovered prepping they didn’t realize how little time was left. Will the preps they were able to make in the short time they had keep them alive when an EMP, followed by nukes, hits the city? Will they live long enough to escape the city?