Peter’s work is available from Amazon in Kindle format. The Apocalypse Crusade War of the Undead Day One: A Zombie Tale is the first book in this series and is free to read on Kindle Unlimited or 99 cents for everyone else. 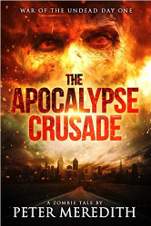 In an apocalypse there is definitely a beginning where mistakes are made and the seeds of evil are allowed to sprout and take shape. However, an end is not so certain. Once an Apocalypse occurs not even death is certain. Sometimes death is only the beginning.
At first light that morning, Dr Lee steps into the Walton facility on the initial day of human trials; she can barely contain her excitement. The labs are brand spanking new and everything is sharp and clean. They’ve been built to her specifications and are, without a doubt, a scientist’s dream. Yet even better than the gleaming instruments is the fact that Walton is where cancer is going to be cured once and for all. It’s where Dr. Lee is going to become world famous…only she doesn’t realize what she’s going to be famous for.
By midnight of that first day, Walton is a place of fire, of blood and of death, a death that, like the Apocalypse, is seemingly never ending.

I recently got this for my Kindle during a free purchase promo and really got into it. Just about the entire story takes place over a single day and Peter does a great job fleshing out a series of “mistakes” that lead to the outbreak and loss of containment. I found it good enough that I’ll be purchasing the other books in this series. The author’s web site http://petermeredith1.com has the other books in the series listed along with a number of titles that aren’t part of his zombie apocalypse series.