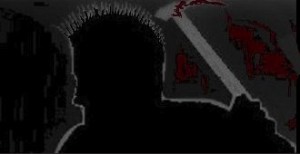 A long and very entertaining story based on blog entries, which are essentially diary entries is Adrian’s Undead Diary.

The zombies are great, but even if you aren’t in to the ‘zombie thing’ the survival lessons are excellent and worth the read just for them.

The author, Chris Philbrook, has the entire story on his web site http://adriansundeaddiary.com/ and has recently offered it as a series of Kindle books with the first two now available.

Beheading a zombie isn’t easy in a world where you’re more afraid of the living than the dead.

Adrian Ring’s simple life is thrown into chaos when the world is ripped apart by a plague of undead and legions of desperate survivors. Retreating to Auburn Lake Preparatory Academy, Adrian attempts to rescue friends and family on the way while dancing around his impending insanity over who and what he left behind, and evading maniac survivors. He saves his cat Otis, but shoots his mom. Pretty successful, all things considered.

Dark Recollections is the first part of Adrian’s own story of how he survived after “That Day.” Told through his eyes as he talks to his laptop, affectionately named ‘Mr. Journal,” and through short stories that entwine with his tales that bring forth dark visions of a world being eaten alive by an unimaginable evil. Adrian’s Undead Diary is an eight part epic about a solitary, guilt stricken man that didn’t think he deserved to live, but realizes very soon that he survived, and suffered for a reason.

This story is available, in Kindle format, on Amazon.
Click here to view the listing. 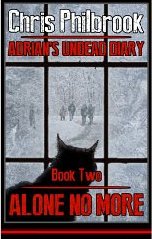 Realizing you have a surviving neighbor after the world is overtaken by the undead isn’t always a good thing.

Unless that neighbor is the grumpy, armed and retired Green Beret Gilbert Donohue. In that case, finding out you’ve got a neighbor is a lot like hitting the proverbial jackpot. Adrian’s piecemeal life on campus since “That Day” has been a struggle. Retrieving supplies from local neighborhoods filled with the walking dead has been dangerous for him, but he’s stayed alive by being a little smarter than the other survivors, and a lot faster than the roaming, hungry zombies that have overtaken his home town, and the world.

In Alone No More, the second installment in the smash hit series Adrian’s Undead Diary, Adrian’s life is poised to become even more complicated and dangerous when some familiar faces find their way to ALPA with some less than friendly folks on their tail. For the first time the breadth of Adrian’s Apocalypse widens to reveal the death of one of the oldest cities of mankind in one of the most popular of all the AUD short stories: Jerusalem.

Sometimes in the cold of winter, the only thing that can keep you warm is freshly spilled blood.

This story is available, in Kindle format, on Amazon.
Click here to view the listing.