Kristen’s work is available from Amazon in Kindle format. Zombie Games Origins is the first book in this 5 book series and is free to read. If you’ve signed up for the Kindle Unlimited program ($9.99 per month) all of her books are included in it. 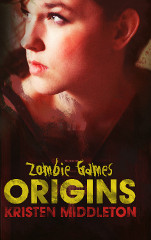 Seventeen year old Cassandra Wild thought living in the chaos of her mother’s home daycare and dealing with her developing feelings for Bryce, her new Martial Arts’ instructor, was a struggle, until the night her world turned upside down. When an untested vaccine kills more than just a rampant flu virus, Cassie learns how to survive in a world where the dead walk and the living…run!

I picked up this story while looking for some new PAW/Zombie fiction and found it to be an engaging and fun read. The author’s web site http://www.kristenmiddleton.com/ has info on the zombie series and many of her other books which, based on the covers, appear to go more into the romance novel genre although at least one series looks to be sci-fi based and another goes into the supernatural arena. So, whatever your interest there’s probably at least one series here that will grab your interest.