When I first started to realize just how unprepared I was to deal with any type of medical situation it did come as a bit of a surprise. I always felt confident to deal with whatever life throws at me but the more I read and investigated the more I realized this was a false sense of security.

So, what to do first?

Look at a book or online for medical advice and you’ll see many articles on what to do, sometimes what not to do, and more often than not, conflicting information. Many books, websites, a CERT class and a first aid/CPR class later I feel that I now have an approach that is something I am comfortable with.

Disclaimer, I am not a doctor, I am not giving you medical advice, just sharing my thoughts and what approach I feel is good for me. You must make your own decisions, blah, blah, blah, you get the idea.

One of the first things I came across was EDC (Every Day Carry) medical kits, usually in Altoids tins. I’m not sure who came up with the approach of cramming stuff in these tins but it does really make you think about and consider what will and won’t fit. I’ve found Altoids tin kits for medical, fishing, camping, general survival, with a ham radio, with a flash light, with a cooking stove and almost anything else you can think of stuck in there or made from a tin. 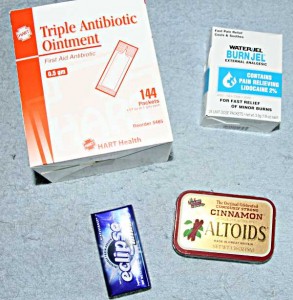 Using that as my starting point I went one step better and made an Eclipse Mints tin kit followed by an Altoids tin kit. Since these kits are small… ok, very small, and tubes of ointments and other common things found in your medicine cabinet simply won’t fit I had to get creative. Looking around, mainly on Amazon, I found individual packets of various substances. Antibiotic Ointment is a great starting point. BTW, at the end of this page you’ll find links to Amazon for most of the products I mention. You can buy small quantities of these single use packets but getting a whole box with usually 50, 100 or 144 in there is not much more, with a much lower per unit cost, and it allows you to make a number of kits and still have some supplies left.

First off, find your container. In the case of the Eclipse Mints, not a problem. I use these at work and in my car for those times when heading into the bosses office after slamming a gyro filled with onions is not a good idea. I tried the Altoids and, well, sorry Altoids I really don’t like your mints. Your tin’s are great but not so much with your mints. So, they got tossed, the tin was kept.

I figured some band-aids, antibiotic ointment, sting relief, anti-itch ointment and burn relief gel would be a good starting point. In the Eclipse container this pretty much fills it.

Looking at the picture to the right you can see a filled container and an empty container waiting to be filled. Two packets each of Antibiotic Ointment and Anti-itch Cream (hydrocortisone cream), one Sting Relief (Alcohol pad), one Burn Jel and five band-aids is about all you can cram into the container.

Once filled the container easily fits in a desk, pocket, purse, car glove box or really just about anywhere else. You could make a dozen or more of these and stash them all over. 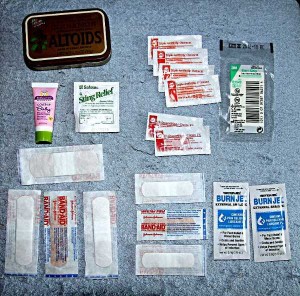 The next kit, made from the Altoids tin provided me with more than double the space and I was able to add more and additional items.

A small tube of Baby Safe SPF-50 sun block was included as was a pack of Steri Strips also known as butterfly closures. For a deeper cut that needs more than just a band-aid to keep it closed the steri strips work well. Think of them as stick on stitches.

You can see in the photo below these components packed in the Altoids tin. 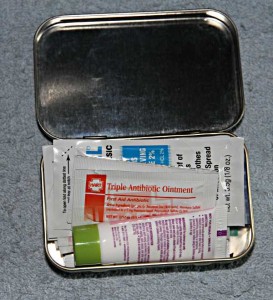 The next goal was to make a large kit. Something with a bit more versatility that would not fit in a pocket but give the user many more options and more supplies to work with. I find with the smaller kits that they are good for only a few uses before needing replenishment. With the larger kit you could go longer before needing to restock it. 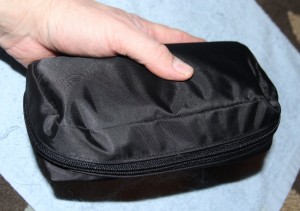 I would definitely recommend to always refill it as soon as possible after use, but if you were gone from your replenishment supplies for a period of time, say a day trip, then the larger kit makes more sense.

The carrying of this kit would be done in a backpack, day bag, camera bag, in the car, diaper bag or any other type of bag or pack you’d have with you. It certainly is not something you’ll fit in your pocket. 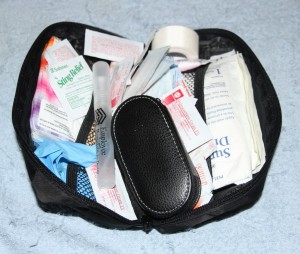 Opening up the bag I used, literally a spare bag I had from something that I dug up out of the closet, you can see just how much is in there.

The bag is not really important, just find one that looks like it will hold what you choose to put in yours. Make up bags, travel pouches and small electronic bags are good possibilities. Goodwill and second hand stores usually have a whole shelf full of these to pick from and are usually a buck or two at most.

Inside this bag is the following:

The purpose of everything might not be readily apparent so a bit of explanation is in order. The Gauze Pads, Surgical Dressing and Non Stick Pads, along with the tape can be used to cover up a larger wound. Popsicle sticks, again with the tape, make great finger splints in a pinch. A sprain or broken finger can be immobilized. The personal grooming kit is for if you crack a finger nail or get a hang nail or just need to cut or trip something. Certainly not life threatening, but definitely annoying. Finally the straw would be a for a last ditch emergency tracheotomy. If someone is choking or having an allergy attack and can’t breathe, is passed out and blue and the sirens aren’t audibly on the way, then the knife from the multi tool and the straw could be utilized in an attempt at saving their life. Hopefully if I’m ever in this situation there would be an off duty medical professional in the area who could better utilize the supplies I have.

I’ve used these kits a few times already in the real world, usually involving one of my grand kids and one of their “ouchies.” They’ve worked great. But… and you know there is always a but… One time I had only the pocket kits with me and managed to seriously slice my finger in the car. The cut was not a deep one but rather more of a filleting action cleanly slicing skin right off the side of my finger.I put a band-aid on it and within literally two seconds it was soaked through with blood and useless. Pulled it off, wrapped it in a Kleenex and got another band-aid ready. Put it on and again nearly immediately soaked through. Eventually it did clot and stop bleeding (more or less) at which point I put on yet another band-aid to protect it.

This got me thinking. With the larger kit I could have put some of the pads or dressings on the wound and it probably would have worked but what if I had done worse? What if it was deep and the blood was spurting out?

I researched a bit more, focusing on the trauma and critical injuries rather than the boo-boos and came up with a true emergency medical kit.

This kit would be used for very serious injuries, usually something that if left untreated would probably be fatal. The type of injuries could include, but of course are not limited to: major artery damage, limb mangled or amputated, major penetration wound (knife stab, for example), chest penetration with collapsed lung (sucking chest wound, possibly from a gun shot) and broken limb with bone protrusion and massive bleeding. 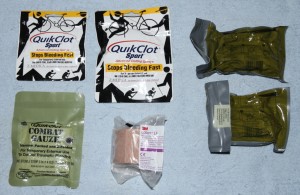 The idea is to stop the bleeding, seal the chest and/of protect the wound. 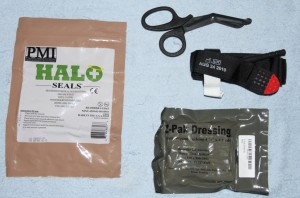 This is all packaged in a bright red bag and normally is kept in my car. Most situations in which I would expect to use it, I would also be near my car or have driven to there and then taken it with me (in a backpack for example).

The gear in this kit is way beyond the boo-boo kits discussed earlier and should really be something you learn about as much as possible. I would strongly urge you to buy extras of each item and then open one up and try it out. Practice putting on a Battle Dressing or applying a tourniquet. The combat version is designed to be used, one handed, on your own body if necessary. 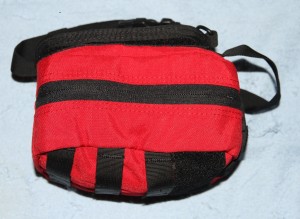 There is a great discussion of these types of “combat” life saving aids at http://www.thinkdefence.co.uk/2011/07/battlefield-medicine-afghanistan-2011/ and a series of hour long videos from PBS focusing on modern day combat injuries and life saving measures starts with this episode http://www.youtube.com/watch?v=_8rKzUk1wPg.

Looking at the three kits, you have a boo-boo or I got stung by a bee kit at the basic level, really something that would be targeted towards the minor injuries that kids get. The next step up gives you the increased capabilities of handling larger cuts and wounds and sprains or breaks in the digits. The final kit is for life threatening injuries.

If you can get your doctor to write a prescription for an Epi-Pen, that would be a good addition to the larger two kits. Depending on your skills and knowledge I’m sure you’ll be able to think of other options. Perhaps if there is a diabetic in your family you would include insulin. Using the FlexPen you can have a dose of insulin with you that does not require refrigeration.

Remember, for the single use items, buying in bulk is usually a big cost savings and will provide supplies for many medical kits.

Links to the supplies mentioned: